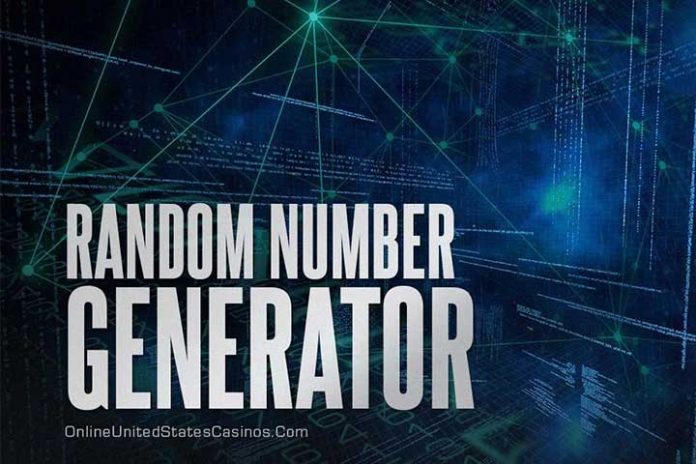 A Random Number Generator (RNG) is a machine used to generate numbers or symbols that are not predictable. Okay, almost not predictable. What this means is most industries, especially casinos, use RNG that uses a seed number to produce an outcome.

So in hindsight, the RNG sequences depend on this seed number and are not truly random. As you read on, you’ll better understand how the machine works, some of the industries it’s used, and its pros and cons.

Before we get to explaining the random pattern generation methods, here are the most common types of RNG machines:

Hardware Random Number Generators generate sequences from physical attributes. These can include photoelectric effects, temperatures, or nuclear decay in atoms. So long as it’s a constantly changing environment condition, you can always count on an HRNG to predict an outcome.

As a result, people can reproduce these seemingly random patterns if they know the seed number. However, this is rare as the algorithms used to make the seed are very technical and challenging to reciprocate.

Where Are Random Number Generators Used?

Gaming platforms use RNGs in titles that do not require a dealer. You’d think this only applies to Slots and Roulette. But even card and dice games like Poker, Blackjack, and Craps use these machines as long as they are virtual and not live.

Taking an example of Slots, here’s how a casino RNG works:

It starts by assigning a value to every symbol on a reel. So if there are ten symbols on one reel, and it’s a conventional five-reel machine, the RNG would have values of 1-10 for each reel.

When you spin, the outcome would be five different symbols based on the values assigned by the RNG. And if the 5 ‘random’ symbols make the winning combo, you’ll receive your payout.

Why Are RNGs Important In Casinos?

With RNGs, both the casino and the player can’t manipulate the winning chances, making playing much more fair and fun. And that’s why safe online casinos use them.

But how can you make sure a casino’s Random Number Generator is fair? Check for licenses from trusted regulators like the Malta Gaming Authority, Curacao Gaming, and the UK Gambling Commission. They perform all sorts of RNG testing such as:

In cryptography, many network security algorithms rely on randomness, specifically from Hardware Random Number Generators. That’s because it makes the encryption and decryption stronger if it’s unpredictable. And if it’s sturdy, there are minimal chances of anyone breaking into a system and causing any harm.

Statistical sampling refers to selecting individuals from a group to estimate the characteristics of the population. Companies use Random Number Generators to pick the samples that best represent the population in question. That reduces the costs they would use in conducting surveys and helps in increasing accuracy.

There are several RNG alternatives for specific platforms, including SaaS, Windows, and Android. Among these is GeneratorMix, which is available for free. The system’s generators split into many topics ranging from entertainment to science.

Other great apps to use in place of Random Number Generators include:

These create random numbers, letters, symbols, and even Chinese characters, just like a Random Number Generator. You can even customize the settings to suit your preferred results!

Pros And Cons Of RNGs

RNGs are perfect for ensuring high degrees of randomness in online gaming, security keys, and statistics. That’s because they significantly increase the outcome choice while reducing human bias.

An obvious con, though, would be the reliance on a seed. As we said, should a person know this value, they could predict the results provided they have the necessary resources.

Random Number Generators In A Nutshell

In a nutshell, a Random Number Generator is a complex algorithm used to ensure programs are as random as possible. All that helps make the outcomes more secure, accurate, and fair when playing casino games or when used in any other field.

Bryan
Hi! I'm Bryan, and I'm a passionate & expert writer with more than five years of experience. I have written about various topics such as product descriptions, travel, cryptocurrencies, and online gaming in my writing journey. The latter is one of my favorite topics, and you can find some of my premium casino content at OUSC.