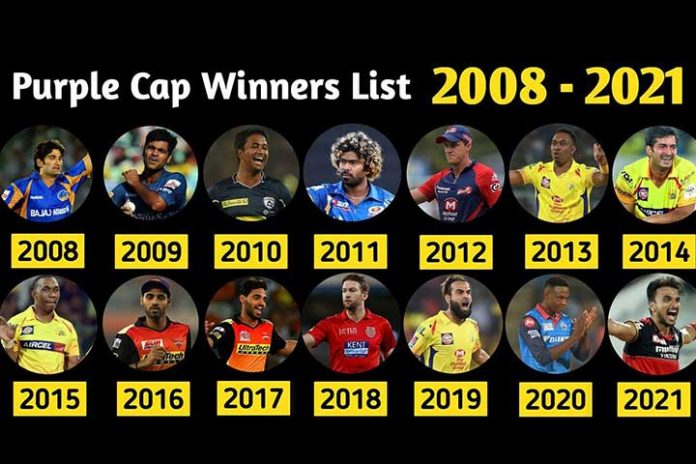 IPL is no longer a batsmen league now. It is discovering more and more bowlers with equal potential to change the game.

Best Bowlers from all over the world participate in the IPL. And it’s a great opportunity for them to show their credentials to the world.

Below, we’ve documented a list of Purple Cap winners throughout the years.

On a side note, if you’re looking for a trustworthy betting site in India. Look no further, as 24betting is all you need. It supports Indian currency with fast cash out payment methods and easy bettings. We offer expert guides on how to bet on IPL that’ll make your bettings smooth and convenient.

Back in 2008, Pakistani players were allowed to participate in IPL. And that is when the Pakistani pacer Sohail Tanvir made history by winning the Purple Cap award during the inaugural season. Sohail took the most wickets which are 22, during that year, playing his part in the victory of the Rajasthan Royals.

This year, a player from the Deccan side, broke the record of Sohail’s 22 and took 23 wickets in just 16 matches. It was the highest of the 2009 season. And once again, the number of wickets contributed to the winning of the very team, which was Deccan Chargers this time.

It was once again Deccan Chargers that took home the Purple Cap award with help of their left-arm orthodox bowler, Pragyan Ojha. Ojha took 21 wickets at an economy of 7.29 in 16 matches and an average of 20.42.

The same year Mumbai Indians were placed second on the IPL points table, they marked their name in the list of Purple Cap winners. Lasith Malinga, Sri Lankan fast bowler, was part of the Mumbai Indians team and he took 28 wickets, the highest of that time, in 16 matches.

Morne Morkel, a South African pacer won the Purple cap award this time, for Delhi Capitals, formerly known as the Delhi Daredevils. Morne took 25 wickets in 16 matches with a 4-wicket haul at an economy of 7.19.

Dwayne Bravo or more popularly known as DJ Bravo is one of those bowlers that took the most wickets in IPL history. He took 32 wickets in 18 matches and played a big role in Chennai Super Kings reaching the finals.

MS Dhoni-led CSK contributed another player to the list of Purple Cap winners. Mohit Sharma took 23 wickets in 16 matches and made heads turn towards himself. His brilliant performance in IPL 2014 was the reason he was chosen for the Indian cricket team.

It was another year for Chennai Super Kings, in a row and another year for Dwayne Bravo to win the purple cap. This Caribbean bowler took 26 wickets in 17 matches at an economy of 8.14 and an average of 16.38.

Bhuvneshwar Kumar was another addition to the list of Purple Cap winners. Kumar while playing for the SRH took 23 wickets in 17 matches with one 4-wicket haul. It was the same year that Sunrisers Hyderabad won their maiden IPL title and Bhuvneshwar Kumar played his equal role in it.

Bhuvneshwar Kumar became the first-ever bowler to consecutively win Purple Cap in the second year as well. Kumar while playing for the SRH took 26 wickets this time, in 14 matches with a brilliant 5-wicket haul.

During IPL 2018, any Punjab Kings bowler for the first time won Purple Cap. Andrew’s performance during that year was brilliant as he took wickets one after the other and became the highest wicket-taker of 2018. He took 24 wickets in 14 matches with three 4-wicket hauls!

Have you noticed that Chennai Super Kings players won the most IPL Purple Caps? During the 2019 season as well, a CSK spinner, Imran Tahir won the Purple Cap award with the most wickets, that is 26 in 17 matches, including two 4-wicket hauls.

After the 32 wickets, 30 wickets by Kagiso Rabada were the highest of all time. Rabada took these wickets in 17 matches with two 4-wicket hauls and won the Purple award for himself.

RCB’s Harshal Patel became the first bowler to chase down Dwayne’s target of 32 wickets. Harshal while playing for the RCB, took 32 wickets in 15 matches, which means in lesser time than DJ Bravo and won the Purple Cap award. His wickets include one 4-wicket haul and one 5-wicket haul.